12 Comments
Following is an English translation of an article I wrote that was published on Starnieuws yesterday. The original article is in Dutch and you can read it on Starnieuws if you prefer that version.

In a recent column on Starnieuws Mr. Hans Breeveld wrote the following: “Nobody should allow themselves the luxury of not voting. Anyone who does not vote on upcoming May 25th loses the moral right to criticize or complain during the coming term of office.” The assertion in the last sentence is incorrect; it is precisely those who are not going to vote who have every right to complain when they suffer the disadvantages of a system imposed on them by coercion. After all, they have not chosen for that system.

In contrast, those who do vote are complicit in all the suffering and damage caused by their ‘elected’ criminal government, regardless of which political party they voted for. It is partly thanks to their participation through voting that the government gains its legitimacy and on whose behalf it then claims to act. In a previous article, I had already pointed out that the government is a criminal organization, and participation through voting therefore means participation in a criminal organization. Only those who are not aware of this will make the mistake of voting; voting is therefore only done in an unconscious way.

Fortunately, an increasing number of people around the world are becoming aware that voting during elections every few years is not only futile but also immoral. This is also the case on the plantation Surinam. In 2010, the number of non-voters was approximately 80,000. In 2015, this number rose to approximately 100,000. There is a good chance that in 2020 there will be an increase in the number of non-voters again.

Participating in politics and especially the elections has been a scam from the very beginning to give everyone the illusion of authority or say, while every time it turns out that within this system the ‘rulers’ have more authority than you have over your life, your possessions and even your body. This is by definition slavery. The so-called ‘choice’ that you get when you vote is also a farce. This ‘choice’ is limited to a few options that keep you in the system of exploitation and slavery. In fact, you always ‘choose’ for the system and thus for slavery; you don’t get the choice for freedom. 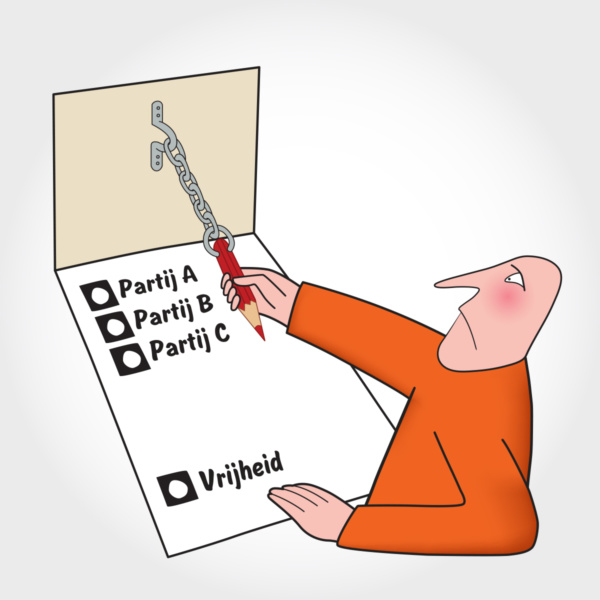 Voting: Freedom is never a choice.

These 51 ‘representatives’ within the ‘parliament’ can be manipulated in all sorts of ways and forced to implement certain policies. As we have repeatedly seen throughout history, and especially recently, the policies of these 51 ‘representatives’ are rarely in the interest of the rest of the slaves on the plantation Suriname. On the contrary, it turns out that the slaves are being exploited in exactly the same way for generations within this system, as I showed with an example in a recent article on Starnieuws.

So regardless of which political parties win in the upcoming elections, the people on the plantation Suriname will once again prove to be the big losers. Therefore, if we want to be honest, we can always speak of losing the elections.

This entry was published on Sunday, May 17th, 2020 at 9:07 am by Karel Donk and is filed under Law Politics Takes on Life freedom slavery statism. You can use the permanent link to bookmark and/or share it.